A Spawner component can be added to any game object. It has built in support for spawning, despawning, and respawning based on the player's interaction with and proximity from an attached collider. Manual control of the component via Game Creator actions is also supported. 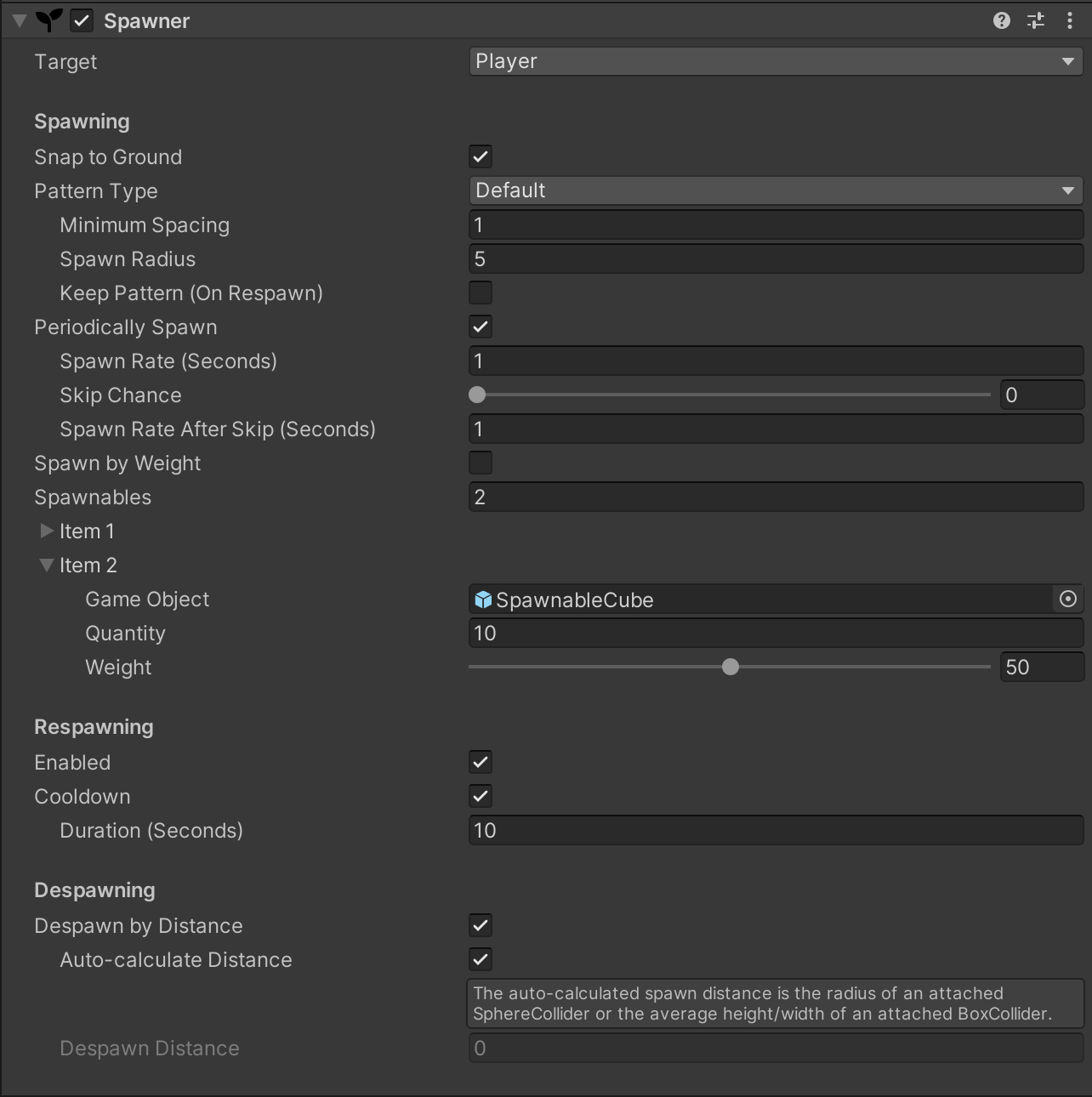 When enabled, the Y position of the spawned object is dynamically set to the ground under the object - effectively "snapping" the object to the terrain below. This prevents objects from being spawned under or above uneven terrain, then hovering out of site or falling (if the spawned object has a rigid body component).

Spawning can be done in a variety of patterns, relative to the position of the Spawner:

If enabled, the spawnables will appear periodically based on a timer.

The number of seconds before a spawnable will appear.

The chance that nothing will appear during a spawn.

The number of seconds to wait after a spawn is skipped. This setting, in combination with Skip Chance can add variability to spawning to make it feel more organic.

If enabled, a spawnable is randomly spawned using a simple weight-based selection formula.

The list of spawnables defines which (and how many) objects are spawned by the Spawner component. If the Spawn by Weight feature is disabled, the spawnables' Weight property is disregarded.

Spawnable objects can be automatically respawned either immediately after the player re-enters the spawn zone or after a developer defined delay.

If enabled, spawned objects will be automatically respawned when the player re-enters the spawn zone.

If enabled, a respawn will only happen after a specified number of seconds.

If enabled, spawned objects will be automatically despawned when the player leaves the spawn zone and is a set distance from the closest spawned object.

If enabled, the despawning distance will be automatically computed. The auto-calculated spawn distance is the radius of an attached SphereCollider or the average height/width of an attached BoxCollider.

The distance the player has to travel from the Spawner's origin before the objects are automatically despawned. This property is disregarded if Auto-calculate Distance is enabled.

A Spawner can be manually controlled with the Spawn and Despawn actions, included with the Combat module.
Any standard Game Creator trigger can be used to invoke these actions.

Select an object that has a Spawner component as the actions target.

Disable the Despawn by Distance option when manually controlling the Spawner with triggers/actions, or the objects will never appear to spawn.

Select an object that has a Spawner component as the actions target.