DevKit is a component and API game development toolkit.

The goal of the asset is to provide stable, reusable boiler-plate code and component building blocks that developers can plug into their project (and extend if desired).

A variety of animation and transform-manipulation components are included. The components are built on top of an extensible programmatic API (full source code included!)

The asset's over 100 prefabs, along with a simple character controller, are used in the provided example scenes to demonstrate DevKit's components. The average polygon count per-model is 150.

Out-of-the-box, the animation API can be used to move, scale, rotate, resize (for RectTransforms), and recolor (for Renderers) with a few simple lines of code.

To get started, be sure to import the Tweening namespace:

The animation API uses a builder pattern to animate a GameObject:

Or using the fluent style:

Method calls can be chained together:

An action can be called in the builder's run method. For example, to set the GameObject to inactive (or some other operation):

Tweens can be executed in a sequence by passing a boolean to the Run method:

A third parameter combination exists for the Run method that allows for sequential tweens and a callback function when the animation completes:

Also available are shortcuts to move, scale, and rotate a Transform if the builder pattern is not desirable:

In addition to the Transform tween options. For example, a UI component can be rotated like a regular Transform:

Note that resizing is a separate operation from scaling for a RectTransform:

Inside of a custom UI component, the Transform can be accessed as a RectTransform.

If a Renderer component has Material, the color and alpha can be animated:

Note that the Material must have a its Rendering Mode set to Transparent for the alpha transition have an effect.

The builder pattern is optional for these operations:

A custom animation duration and ease can be used in all of the animation API operations.

The amount of time of the animation's transition can be customized by supplying the Tween builder method with a custom duration:

Be sure to import the ease namespace when specifying an Ease:

The default EaseDirectionType is In.

Creating an ease is simple:

The ease can be supplied either to the builder (making it the default ease for all of the builder's tweens):

Alternatively, the ease can be supplied to the individual tween method calls, making it apply only to a specific tween:

The DevKit animation components are build using the animation API .

The component can provide a simple one-off animation. 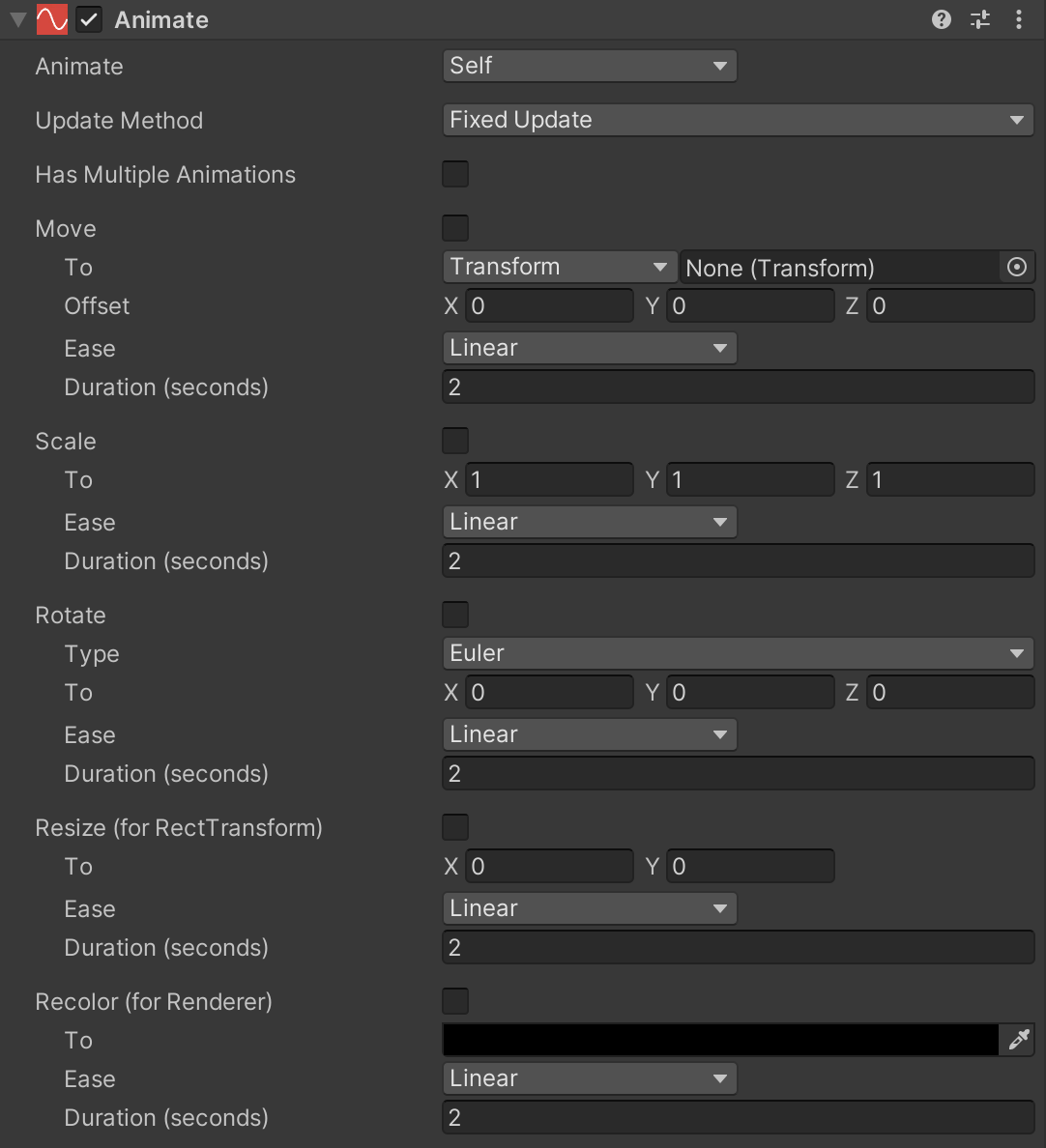 Or a series of animations.

This is an abstract component that other animation components inherit. It cannot be added directly to a GameObject.

The component provides an extensible base implementation that other animation components use to accomplish specific animation effects.

The component is used to visually configure an animation. Certain other components, such as the Animate component, use this component to define which animations they run. 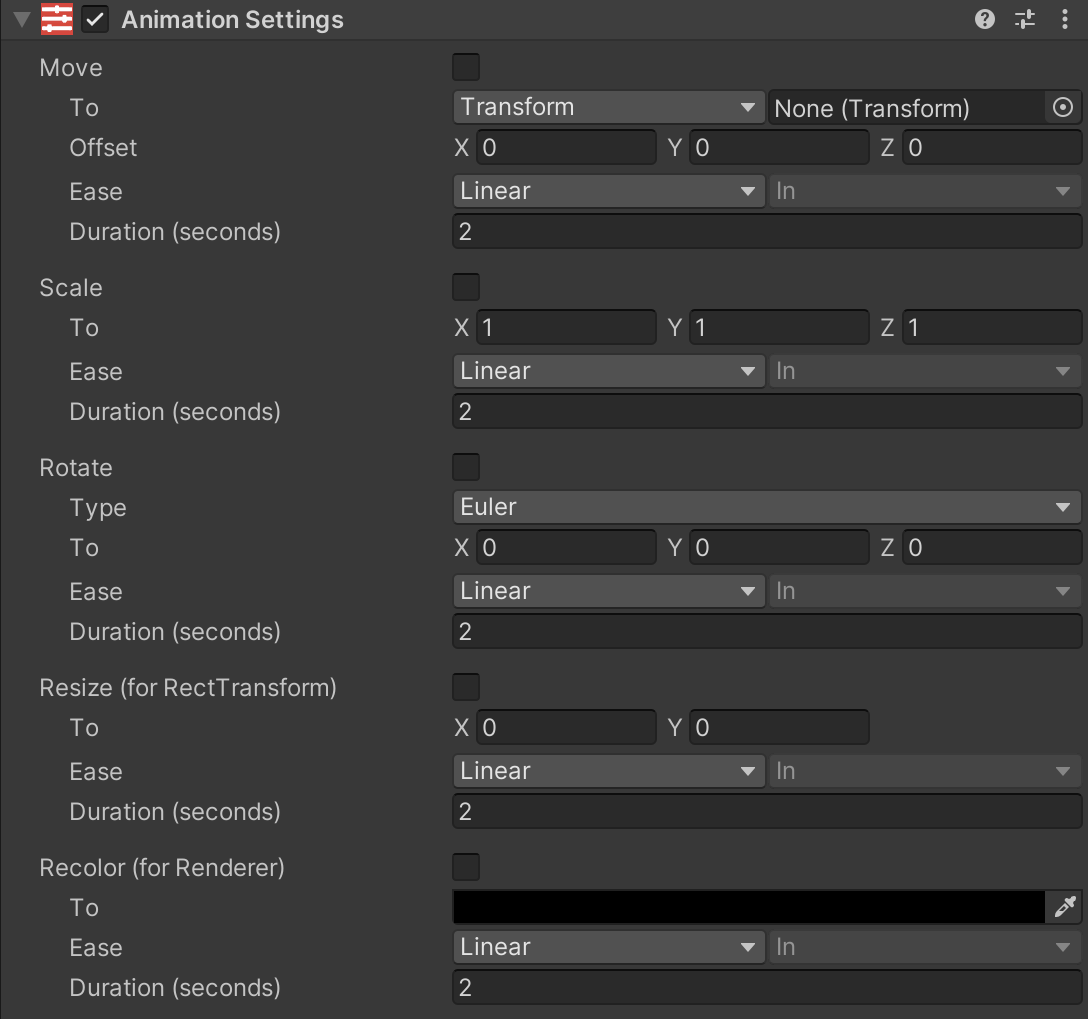 This component moves a GameObject along the x, y, and/or z dimensions of another GameObject. 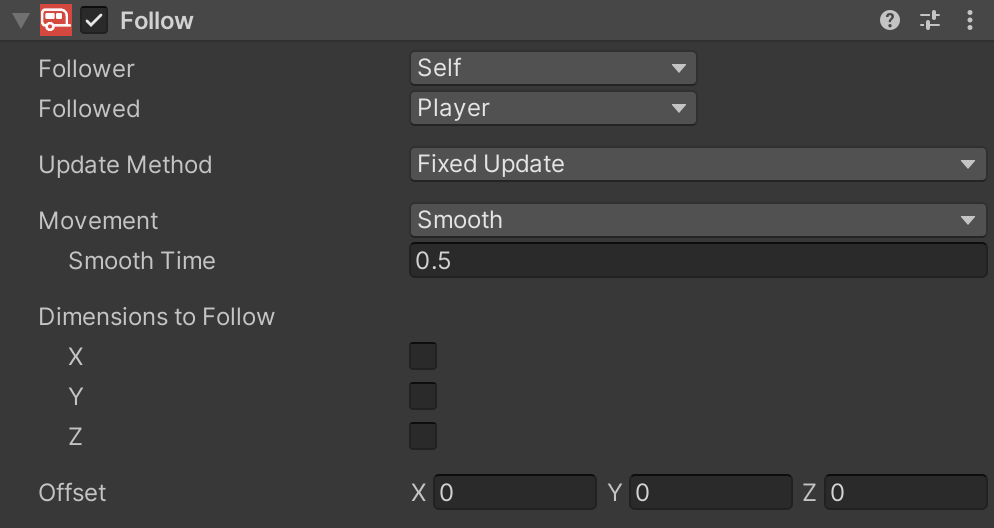 The component moves the animated GameObject from one location to another location. 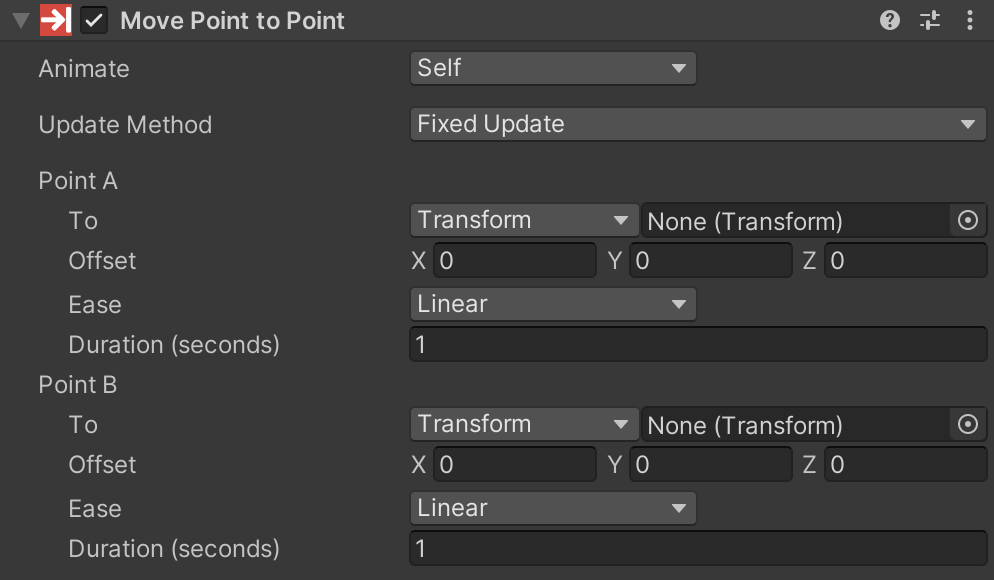 The component is used to apply animation configuration from an AnimationSettings component to the animated GameObject.

...or be explicitly set in the inspector.

On Collision → Move To#

The component moves the component's GameObject toward the GameObject it collided with. Colliding objects are filterable by their tag.

The component changes the color of a material to another random color. This component is mainly for to demonstrate how to animate a color change.

This component sets the colliding Transform to the specified Transform's position, scale, and rotation. This is useful for "teleporting" a GameObject, e.g. when a player's character falls to its death.

This component simply sets the colliding GameObject's parent. This is useful for implementing moving platforms that allow the player to move with the platform.

This component allows a player to control an animated humanoid character model. The simple implementation of running and jumping is suitable for prototypes, demonstrations, testing, and simple platformer games.

This component is used extensively by the DevKit animation API. It should only ever be attached to a GameObject programmatically and for the specific use-case where coroutines need to be run outside of a MonoBehavior.

This component simply destroys a GameObject when a collision occurs.

This is an abstract component that other components extend. It provides a way to reference a GameObject other than the one a derived component is attached to. This adds flexibility when creating components found in DevKit and custom components that depend on DevKit.

A Subject renders as a dropdown in the inspector with a set of options that defines which GameObject is referenced.

Using the SubjectBase component is as easy as extending a custom component class with it:

This produces a custom component with a single subject field:

Though helpful, the base class is not necessary to use a Subject field:

Accessing the Subject in the GameObject via the subject.GameObject:

It is also possible to get components in a variety of ways from the Subject, similar to how components are retrieved in MonoBehavior classes:

A third way, unique to DevKit, is available that gets OR adds a component if does not exist on the Subject:

The Subject can be programmatically switched: